Notice: Trying to access array offset on value of type bool in /www/lablearneronline_388/public/wp-content/plugins/simple-facebook-twitter-widget/simple-facebook-page-plugin.php on line 228

Back to Properties of Matter

What is matter? Matter is described as anything that takes up space and has mass. Within our universe, matter can and has been described in various ways. Early civilizations such as the Greeks believed that matter arose from four basic ingredients or elements: earth, wind, air, and fire. They believed these elements to be pure or unable to be broken down into other forms of matter. Although the substances they identified as elements were incorrect, the concept of

elements exists in our present understanding and description of matter. Elements are currently defined as substances that cannot be broken down to other substances by chemical reactions. Common examples of elements include copper, gold, silver, oxygen, and chlorine.

Early in the 19th century, Dmitri Mendeleev constructed what he termed the Periodic Table of the Elements, an organized grouping of all the elements known at the time. The organization of the table was based on the chemical and physical properties of the elements, and categorized the elements by similarities in chemical and physical properties. Although the modern Periodic Table includes over 100 elements, more than in Mendeleev’s time, the organization remains the same.

Elements, however, represent neither the largest or smallest classification of matter. Elements are composed of atoms, which have been described as the smallest units of matter that still

Compounds are substances that consist of one or more elements combined in a fixed ratio. For example, water (H2O) consists of two atoms of hydrogen and one atom of oxygen. One of the most interesting features of compounds is that their properties

result from the unique combination of atoms rather than the simple presence of an atom. For example, both oxygen and hydrogen, in elemental forms, are gases whereas water is a liquid. Another example is sodium chloride (table salt). Sodium chloride (NaCl) is composed of the elements sodium and chlorine. Sodium is a highly reactive metal and chlorine a poisonous gas. Yet when the two are chemically combined, the resulting compound is an edible solid.

The density of elements and compounds may be a new property that you need to consider. Density is a property of matter that defines the amount of matter that exists in a particular space. Strictly speaking, density is defined as mass per unit volume (g/cm3, for

example), and can be calculated if the mass and volume of a substance are known. Using the formula for density (density= mass/volume) you will calculate and compare the densities of unknown samples of elements and compounds. Although not explicitly stated during these Investigations, you may discover that density is an intensive property of matter. That is, it is independent of the amount or volume of matter. As the volume of a substance increases or decreases, so does its mass. Likewise, as the mass of a substance increases or decreases, so does its volume. Thus, whether 10 grams or 5 grams of a substance is used for the determination of density, the density will be the same because the larger mass of matter will have a correspondingly larger volume.

In addition to the exploration of properties such as density, one of the underlying concepts in these Investigations is that some of the physical and chemical properties of elements and compounds are similar. This concept may be a surprise to you, as a common misconception is that elements and compounds will have apparent and visually distinctive physical and chemical properties because they are defined in reference sources as different types of matter. What you will find in these Investigations is that the color, texture, and visual signs of chemical reactivity with specific compounds are similar between elements and compounds, and identification based only on a few limited physical and chemical properties does not often permit a definitive identification of a substance as an element or compound. Rather, identification of substances should involve a detailed investigation into many of the properties of the substance, as well as a comparison of these properties to known elements or compounds.

After the first two Investigations of this CELL, you and your group will extend your exploration into the properties of matter by narrowing your focus to three important properties of compounds: solubility, miscibility, and pH. Solubility and miscibility are terms used to describe how well solids and liquids dissolve in other liquids. Solubility refers to the ability of

a solid to dissolve in a liquid. Miscibility refers to the ability of one liquid to mix with another liquid. Both solubility and miscibility are considered physical properties. Miscibility can be used to illustrate differences in the densities of liquids. If two liquids are miscible the difference in their densities cannot be determined merely by visual observation because the two liquids mix to create one uniform solution. When two liquids are immiscible, however, the liquid that is less dense will float on top of the more dense liquid.

pH, the final property that students will investigate, is considered a chemical property and is used to describe the acid or base properties of a substance. A numerical scale that extends from 0 to 14 is used to denote the property of pH. Substances with a pH less than 7 are considered acidic, those with a pH greater than 7 are basic, and those with a pH of 7, neutral. Acids and bases are reactive with certain elements and compounds as well as with each other. Thus, the property of pH is often used to predict chemical reactions or select compounds for specific chemical reactions.

In this CELL, your group will study each of these properties as a way of addressing the larger concept that the properties of a compound result from the unique combination of elements that compose the compound rather than from the individual properties of each element. As a result of your investigations, you should conclude that properties of compounds such as solubility, miscibility, and pH depend upon the combination and number or ratio of the atoms of elements within compounds rather than simply the presence of an element. Therefore, compounds composed of the same elements can and often do have different properties and compounds composed of different elements may have similar properties. Ultimately it is these types of observations and analyses that should lead you to consider that differences in properties may ultimately lie in understanding the atomic and subatomic structure of matter.

Note: In this CELL, table salt is listed as a compound with the formula NaCl (sodium chloride). Although sodium chloride is the major ingredient in table salt, table salt is technically a mixture rather than a pure compound, because it also contains silica particles to prevent clumping and potassium iodide as a dietary iodine source. However, the properties of table salt, which you will investigate in this module, are similar to those of pure sodium chloride.

Carbon is the 6th element in the Periodic Table of Elements. 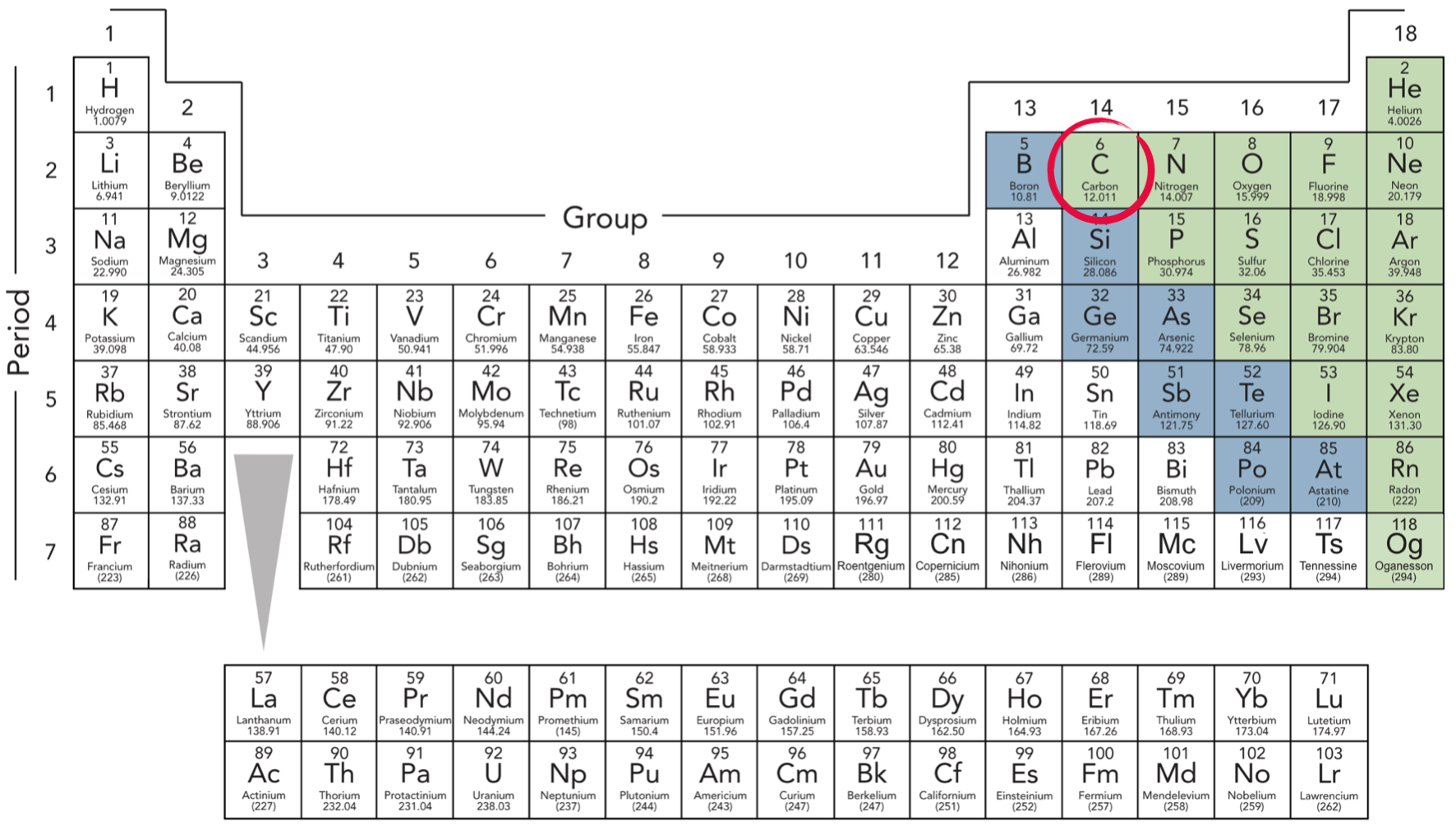 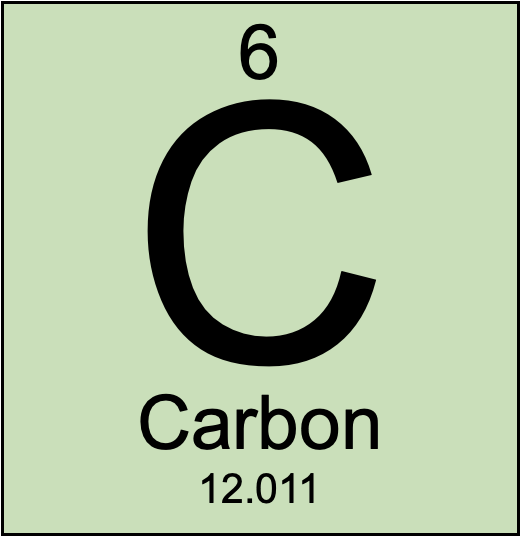 When carbon atoms (black balls in the drawing below) are arranged like this: 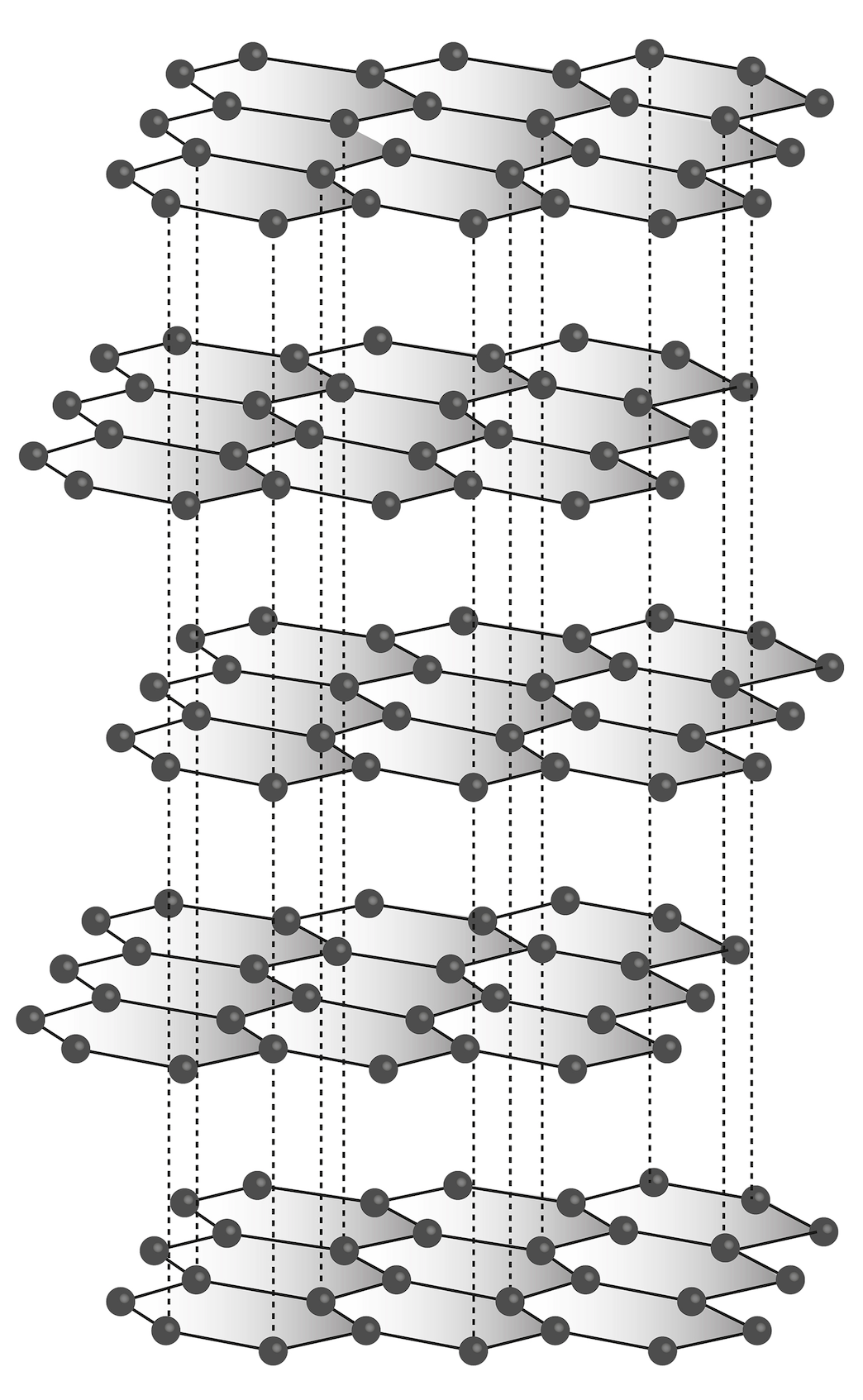 they form graphite, used in manufacturing pencils, for example. 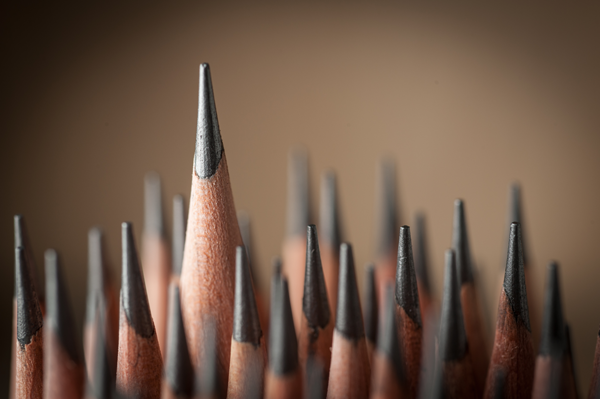 However, when the very same carbon atoms are arranged like this: 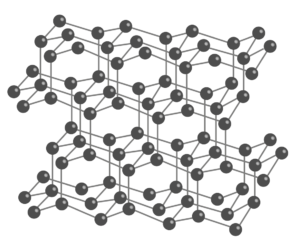 When Other Atoms Combine with carbon, a limitless number of new molecules can be formed.

Some important carbon-containing molecules that are essential for life include:

Back to Properties of Matter